What did Trump say in his statement today? 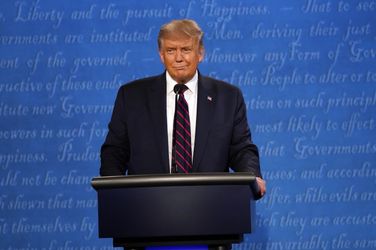 Image source : thesun.co.uk
PRESIDENT Trump made a statement calling for “calm tempers” as the House of Representatives debated impeachment on January 13. The impeachment proceedings come one week after a violent, pro-Trump mob breached the US Capitol. What did Trump say in his statement? President Trump issued a statement through White House Press Secretary Kayleigh McEnany. “In light […] ▶ Full story on thesun.co.uk

Pacers Guard Caris LeVert Out Indefinitely After MRI Reveals Small Mass On Left Kidney   Caris LeVert will be out indefinitely after an MRI revealed a small mass on his left kidney during a physical prior to finalizing the...

11 'unclaimed' bodies washed up on beaches police are still trying to identify   WARNING: DISTRESSING CONTENT. Eleven people are yet to be identified and returned to the families, with some going back almost 50 years

Do You Need To Stop Using Facebook Messenger After Sudden WhatsApp Backlash?   The 1.3 billion Messenger users now have a serious new problem to worry about...

Sickos torture murder victim's family by recreating shocking killing on GTA   Violent video game Grand Theft Auto has been used by sickos to torment the family and friends of Kelvin Odunyi, who was shot dead outside a London...

Despicable China covered up Covid to save $1trillion deal   HOW can we have any faith in the World Health Organisation, whose existing investigation team hasn’t even asked to inspect the Wuhan laboratory? So rather than upset...

Bulldog 'attack' leaves Scots pedestrian injured as cops hunt owner   The victim was out walking with a woman at around 2.15pm when he claims the pooch launched its attack.

Pro-Trump rioter who stormed US Capitol pleads for pardon to avoid jail   Jenna Ryan is asking the President to pardon her and all of those in court over storming the US Capitol building on January 6 in an attempt to stop Joe...

Biden inauguration: National Guard troops pour into Washington amid concerns over violent protests   The calls reflect fears that violent extremist groups are targeting the city in the wake of the deadly insurrection at the US...

SARAH VINE: What TV's Tom has got to tell Harry and Meghan   SARAH VINE: When celebrity couples announce they're taking a break from social media, it usually means they're either heading for rehab or the divorce courts.

Town builds 23-foot giant gorilla from straw in desperate bid to scare off Covid   Villagers in the Japanese town of Chikuzen have gone to drastic measures to confront the ongoing Coronavirus pandemic by building a giant Gorilla ...

Police race to ongoing incident in Glasgow after reports of shop being 'held up'   The incident happened on Kilfinan Street at Balmore Road near Parkhouse.

WalesOnline ~ 22:39 PM GMT January 16, 2021
● Jamie Lynn Spears Blamed Tesla And Elon Musk For The Death Of Her Cats, Then Backtracked   "We have now lost — I don’t even want to tell you how many cats." View Entire Post ›

Ex-BBC man GAVIN ESLER is coming to believe that the break-up of the UK is inevitable   GAVIN ESLER: Like most Scots of my generation, I have several identities. Born in Scotland, I am from a Scottish and Ulster unionist family...

Airports could close after decision to suspend all of Britain's quarantine-free travel corridors   Airlines were this weekend believed to be drawing up plans to further slash the number of flights they operate, with...

Truss will 'jump on plane asap to lobby Biden to drop punitive tariffs on Scotch whisky'   Liz Truss had hoped to strike a last-minute deal with President Trump's outgoing administration to remove the billions of pounds...